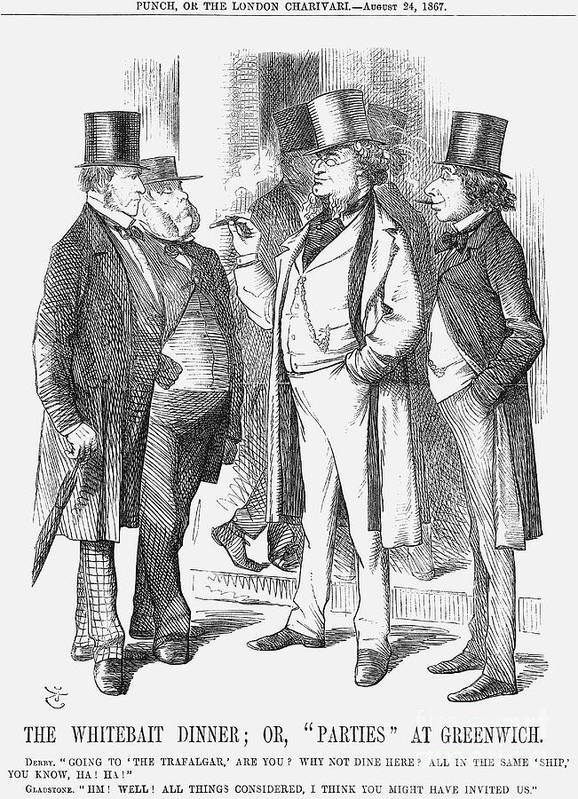 The Whitebait Dinner Or, Parties by Print Collector - 6" x 8"

The Whitebait Dinner Or, Parties art print by Print Collector.   Our art prints are produced on acid-free papers using archival inks to guarantee that they last a lifetime without fading or loss of color. All art prints include a 1" white border around the image to allow for future framing and matting, if desired.

'The Whitebait Dinner; or, Parties at Greenwich', 1867. This cartoon depicts Lord Derby, with a smiling Disraeli at his shoulder, telling Gladstone... more

'The Whitebait Dinner; or, Parties at Greenwich', 1867. This cartoon depicts Lord Derby, with a smiling Disraeli at his shoulder, telling Gladstone and Bright that they may as well dine in Greenwich. Although the Conservative Party was basking in the success of its Reform Bill, Punch believed that others, particularly the Liberal's Mr Gladstone, as well as John Bright, had made such important contributions in shaping the final form of the Bill, that they should be invited to join the government at the annual Whitebait Dinner, held, as always, at Greenwich. From Punch, or the London Charivari, August 24, 1867. (Photo by The Cartoon Collector/Print Collector/Getty Images)Image provided by Getty Images.