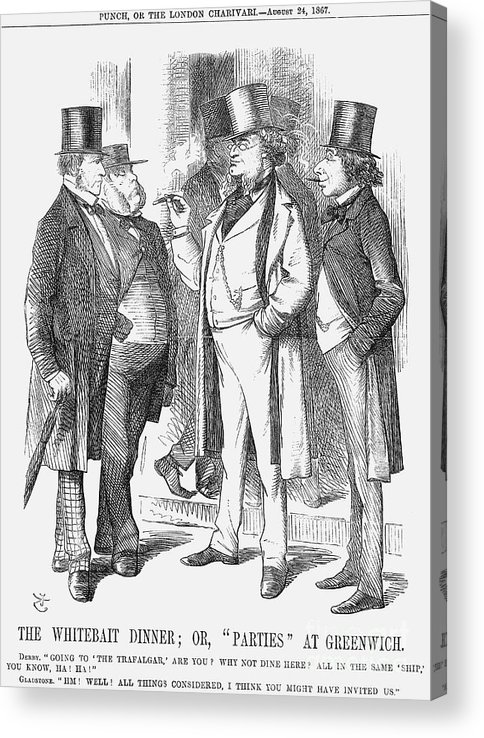 The Whitebait Dinner Or, Parties acrylic print by Print Collector.   Bring your artwork to life with the stylish lines and added depth of an acrylic print. Your image gets printed directly onto the back of a 1/4" thick sheet of clear acrylic. The high gloss of the acrylic sheet complements the rich colors of any image to produce stunning results. Two different mounting options are available, see below.

'The Whitebait Dinner; or, Parties at Greenwich', 1867. This cartoon depicts Lord Derby, with a smiling Disraeli at his shoulder, telling Gladstone... more

'The Whitebait Dinner; or, Parties at Greenwich', 1867. This cartoon depicts Lord Derby, with a smiling Disraeli at his shoulder, telling Gladstone and Bright that they may as well dine in Greenwich. Although the Conservative Party was basking in the success of its Reform Bill, Punch believed that others, particularly the Liberal's Mr Gladstone, as well as John Bright, had made such important contributions in shaping the final form of the Bill, that they should be invited to join the government at the annual Whitebait Dinner, held, as always, at Greenwich. From Punch, or the London Charivari, August 24, 1867. (Photo by The Cartoon Collector/Print Collector/Getty Images)Image provided by Getty Images.