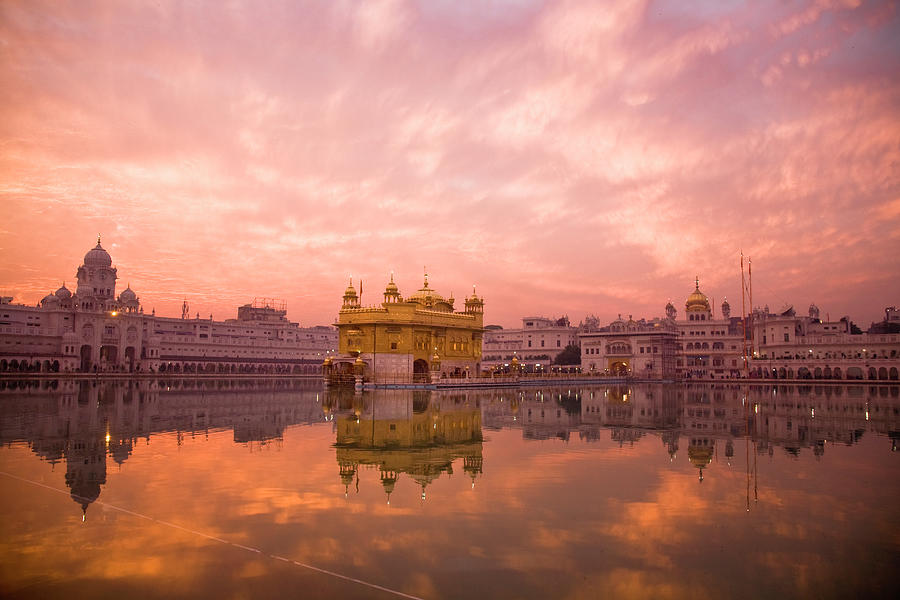 Sunset over Sikhisms holliest of places: The Golden Temple at Amritsar, Punjab. Sikh devotees visit the temple to pay their respects to their God, as well as visiting one of the oldest gudwaras in India. The Golden Temple, also known as Harmandir Sahib, is surrounded by a man made lake or pond, known as the Sarovar, the Temple is the most sacred place for Sikhs all over the world. The 11th and eternal Guru Sri Guru Granth Sahib Ji is present inside it. It is moved to the Sri Akal Takhat Sahib at around 10 PM and then moved back from there to Sri Harmandir Sahib at 4.45 AM. Its construction was mainly intended as a place of worship for men and women from all walks of life and all religions to come and worship God equally. The Sri Guru Granth Sahib is the holiest literature in the Sikh religion, the tenth Guru of Sikhs, Sri Guru Gobind Singh on 7 October 1708 made it the eternal Sikh Guru and the leader of Sikhism. Anywhere in the world where the Guru Granth Sahib is present is equally holy and precious to Sikhs. Harmandir Sahib was built with four doors to show that every religion or faith is allowed to go in to meditate or just listen to the prayers for peace. Amritsar, Punjab, India.