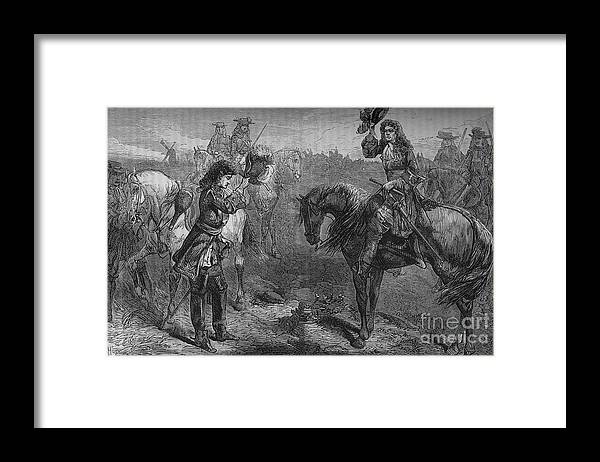 Meeting Of William IIi And The Duke Framed Print

Meeting Of William IIi And The Duke framed print by Print Collector.   Bring your print to life with hundreds of different frame and mat combinations. Our framed prints are assembled, packaged, and shipped by our expert framing staff and delivered "ready to hang" with pre-attached hanging wire, mounting hooks, and nails.

Meeting of William III. and the Duke of Berwick', c1694, (c1880). A frosty interview took place between William III (1650-1702) prince of orange from birth and James FitzJames, 1st Duke of Berwick, 1st Duke of Berwick, an an Anglo-French military leader, illegitimate son of King James II of England by Arabella Churchill and a successful general in the pay of Louis XIV of France. in 1694 Berwick was taken prisoner by his cousin, Charles Churchill, and ransomed for 30,000 florins. From British Battles on Land and Sea, Vol. I, by James Grant. [Cassell Petter & Galpin, London, Paris & New York, c1880] Artist Unknown. (Photo by Print Collector/Getty Images)Image provided by Getty Images.