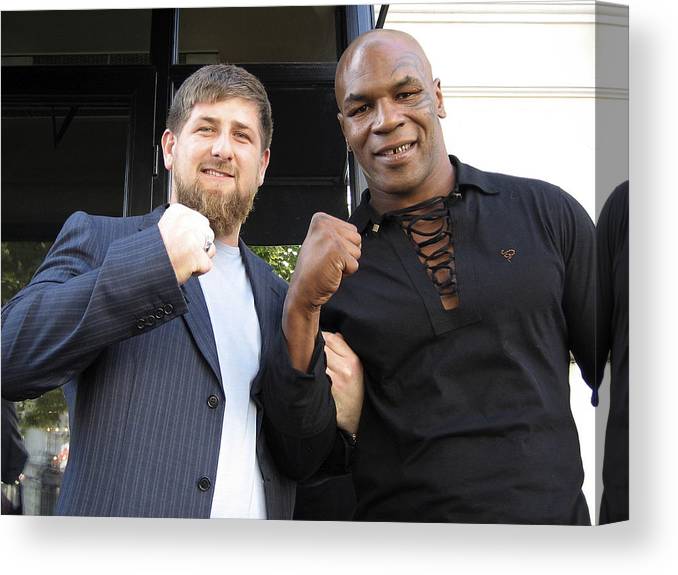 Ramzan Kadyrov canvas print by Getty Images.   Bring your artwork to life with the texture and depth of a stretched canvas print. Your image gets printed onto one of our premium canvases and then stretched on a wooden frame of 1.5" x 1.5" stretcher bars (gallery wrap) or 5/8" x 5/8" stretcher bars (museum wrap). Your canvas print will be delivered to you "ready to hang" with pre-attached hanging wire, mounting hooks, and nails.

GUDERMES, CHECHNYA, RUSSIA - MARCH 2006: Ramzan poses with Mike Tyson during a trip the American boxer made to Chechnya in September 2005. Tyson travelled to the eastern city of Gudermes as the guest of honour at a boxing tournament. The competition was being held in memory of assassinated Chechen president Akhmad Kadyrov. The boxer told the crowd: "I always watched the situation in Chechnya on television, but it is a much more difficult occasion with you today." He also said that when he boxed, it was not for himself but for all Muslims in the world, including Chechens whom he considers to be his brothers. Tyson converted to Islam after being sentenced to six years in prison for rape in 1992. Ramzan was born 5 October 1976 in Tsenteroi, Chechnya, and was made Prime Minister of Chechnya in the beginning of March 2006 and leader of a powerful Chechen militia known as kadyrovtsy. He is the son of former Chechen President Akhmad Kadyrov, who was assassinated in May 2004. He has the backi...