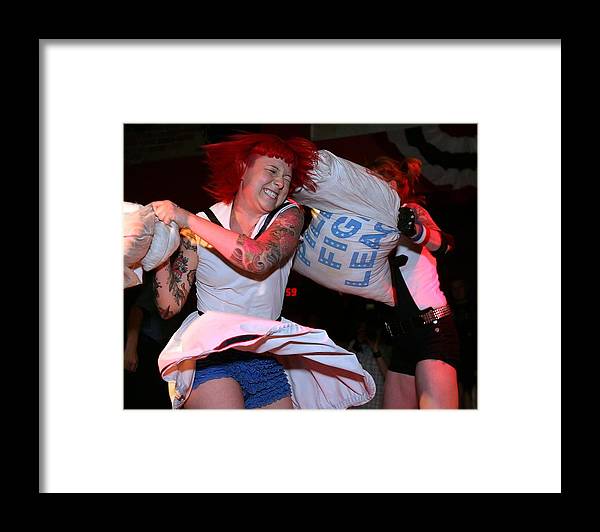 Pillow Fight League framed print by Elsa.   Bring your print to life with hundreds of different frame and mat combinations. Our framed prints are assembled, packaged, and shipped by our expert framing staff and delivered "ready to hang" with pre-attached hanging wire, mounting hooks, and nails.

TORONTO - JUNE 23: Sailor Gerri gets a hit from Laina Beaton at the Gladstone Hotel on June 23,2007 in Toronto, Ontario. Commissioner Stacey P. Case and honorary commissioner Craig Daniels founded the The PFL in February, 2004 but the league had its first official fight on New Year's Eve of 2005. The league consists of only women fighters who, to quote the PFL "are serious brawlers - armed with beauty, brains and a nasty disposition." The fights consist of two rounds that are three minutes in length. Fights are won by pinning down the opponent, referee stoppage or surrender. If after both rounds and there is no winner, a winner is determined by a panel of three judges who score on a point system similar to that of professional boxing. Also included in the scoring are style, stamina and the PFL phrase Eye of the Tiger.(Photo by Elsa/Getty Images)Image provided by Getty Images.