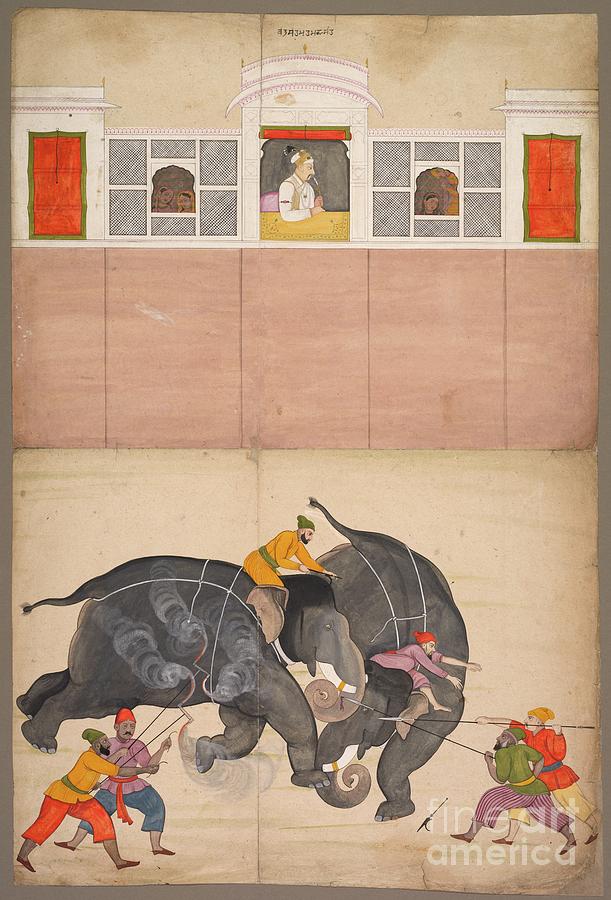 Two Elephants Fighting In A Courtyard

Two Elephants Fighting In A Courtyard

Two Elephants Fighting in a Courtyard Before Muhammad Shah, circa 1730-40. The Mughal emperor responsible for a revival of courtly arts and pastimes was Muhammad Shah (reigned 1719-48). This painting was made by an artist from a small kingdom in the western Himalayas who stayed at the Mughal court in Delhi and painted scenes of his experiences. Like his predecessors, Muhammad Shah enjoyed watching elephant fights. He is shown in his window of public audience, marked by a golden carpet, smoking a hookah. Women from his harem can be seen looking on from behind painted screens. Two pairs of men hold fire brands and spears to prevent the elephants from running off and to keep them under control. The intensity of the fight?captured at a moment when one mahout, or elephant trainer, has dropped his goad and is about to jump off?is augmented by the dense colours and forms in contrast to the otherwise pale planes, balanced only by the strip of palace windows. Creator Nainsukh (Indian, 1710-1778), attributed to. (Photo by Heritage Arts/Heritage Images via Getty Images)