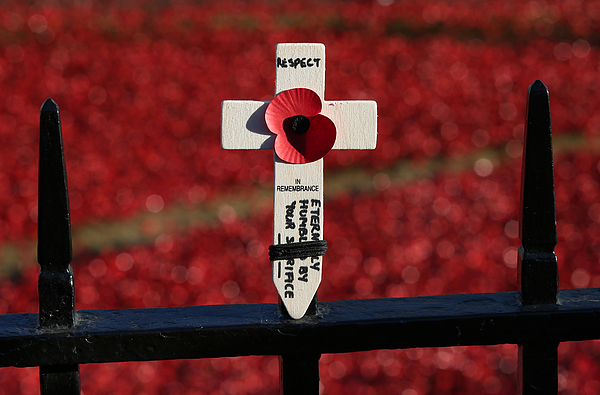 LONDON, UNITED KINGDOM - NOVEMBER 09: A traditional cross of remembrance is placed on railings surrounding the 'Blood Swept Lands and Seas of Red' installation in the moat of the Tower of London on November 9, 2014 in London, England. The installation by artists Paul Cummins and Tom Piper consists of 888,246 ceramic poppies - representing each of the commonwealth servicemen and women killed in the first world war. People across the United Kingdom have gathered to pay tribute to service personnel who have died in the two World Wars and subsequent conflicts, as part of the annual Remembrance Sunday ceremonies. (Photo by Peter Macdiarmid/Getty Images)