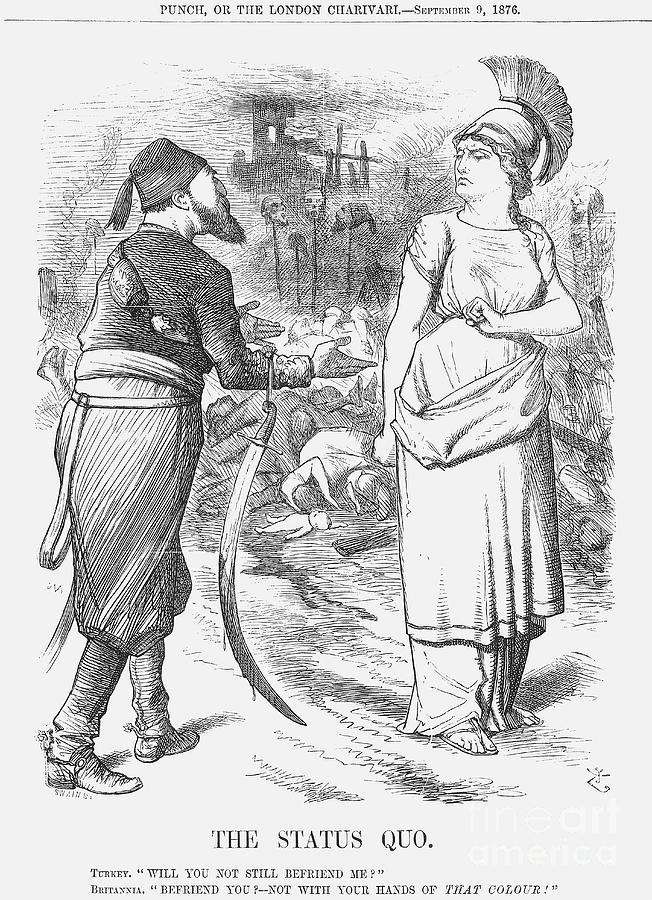 'The Status Quo', 1876. Turkey holds out the hands of friendship to Britannia. However, just as the sword hanging from his wrist is dripping with the blood of his victims, women and children who lie dead and mutilated in the background, so are his hands bloodstained. Britannia turns away from him. This relates to the conflict between Bulgaria and Turkey, during which atrocities were committed by both sides. However, the massacres of women and children by Turkish forces provoked real outrage amongst the British public which led to forceful press denunciation of Turkey. Recently, the former Liberal Leader, Gladstone, had issued a pamphlet entitled Bulgarian Horrors which led the denunciation of Turkey and protested against the non-interventionist stance of the Conservative government, particularly the perceived pro-Turkish stance taken by the Conservative leader, Disraeli (now elevated to the Lords as Lord Beaconsfield). There was much talk of the 'status quo' in the East, but this did little to pacify British opinion. From Punch, or the London Charivari, September 9, 1876. (Photo by The Cartoon Collector/Print Collector/Getty Images)