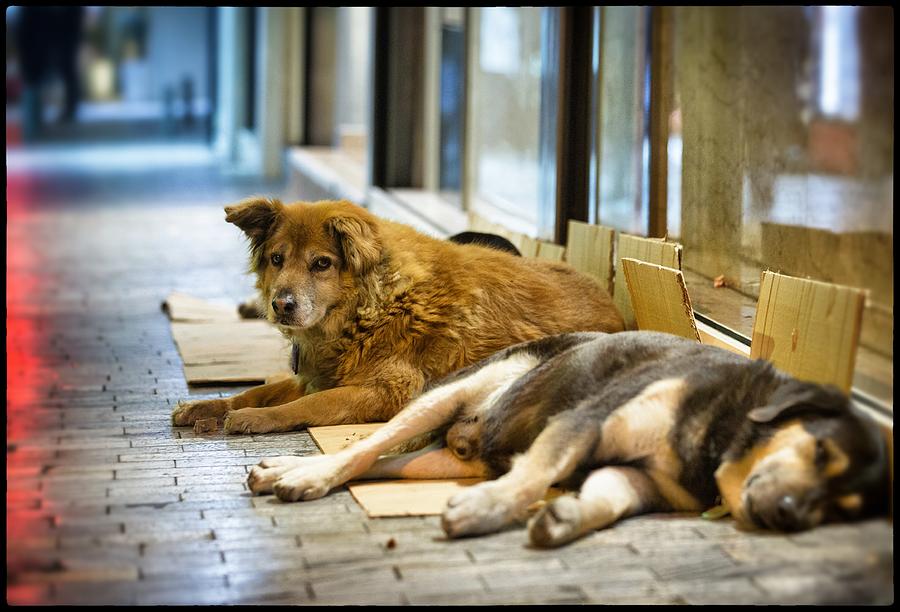 ATHENS, GREECE - JANUARY 21: (EDITORS NOTE: This image was processed using digital filters) A stray dog sleeps in front of a branch of McDonald's in the centre of Athens on January 21, 2015 in Athens, Greece. Stray dogs are a common sight in Athens with many living in small packs in the city's various squares or near tourist spots such as the Acropolis. Most are monitored and tagged by the local authorities receiving vaccinations and veterinary attention when needed. The streets - which the dogs have learnt to navigate around, negotiating busy road junctions and pedestrian crossings - also provide in the main, the food, water and shelter they need whilst various charities and individuals also are involved in their welfare. The reason for their large numbers is varied but theories have included the closure of the traditional city dog pound and the fact that keeping dogs as pets is a relatively recent phenomena in Greece and some owners do not realise the commitment involved and release the dogs as strays. Before the Olympics in 2004 it was widely reported that thousands of dogs had been rounded up and poisoned and in 2011 one stray was even named runner up for TIME magazine's Animal of Year after he was widely photographed siding with demonstrators barking at riot police during the anti-austerity protests at the height of Greece's debt crisis (Photo by Matt Cardy/Getty Images)