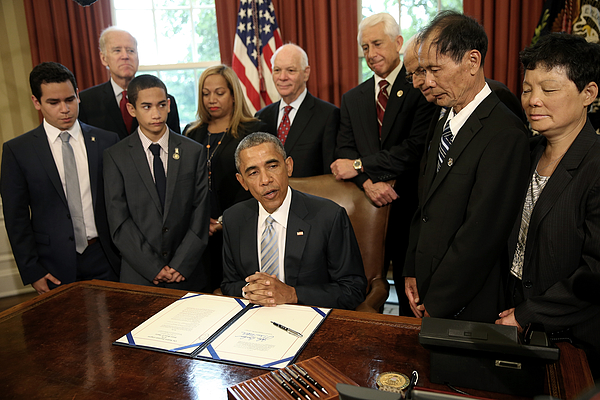 WASHINGTON, DC - MAY 19: U.S. President Barack Obama delivers brief remarks before signing the National Blue Alert Act of 2015 with family members of New York Police Department officers Rafael Ramos and Wenjian Liu in the Oval Office of the White House May 19, 2015 in Washington, DC. The newly signed legislation requires the Department of Justice to establish a national Blue Alert communications network to disseminate information on the serious injury or death of a law enforcement officer in the line of duty, an officer who is missing in connection with the officer's official duties, or an imminent and credible threat that an individual intends to cause the serious injury or death of a law enforcement officer. Standing with Obama are Ramos's sons, Justin Ramos, and Jayden Ramos, and Liu's father Wei Tang Liu, and mother Xiu Yan Li. (Photo by Win McNamee/Getty Images)