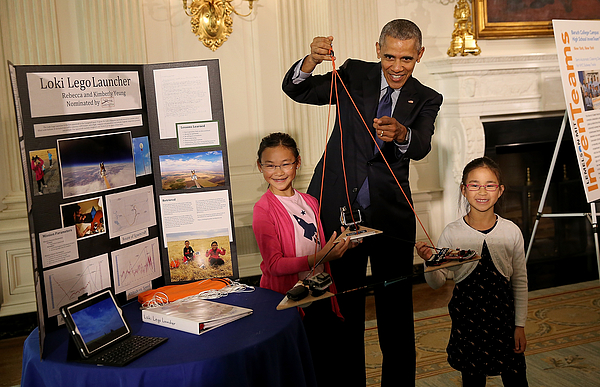 WASHINGTON, DC - APRIL 13: U.S. President Barack Obama listens to sisters Kimberly Yeung (R) and Rebecca Yeung (L) explain their science project while touring exhibits at the White House Science Fair April 13, 2016 in Washington, DC. The Yeung sisters, from Seattle, Washington, built a homemade spacecraft out of archery arrows and wood scraps, and launched it into the stratosphere via a helium balloon. They named it the Loki Lego Launcher after their late cat and a Lego figurine, and it records location coordinates, temperature, velocity, and pressure and reports the data back to the young inventors on the ground. (Photo by Win McNamee/Getty Images)