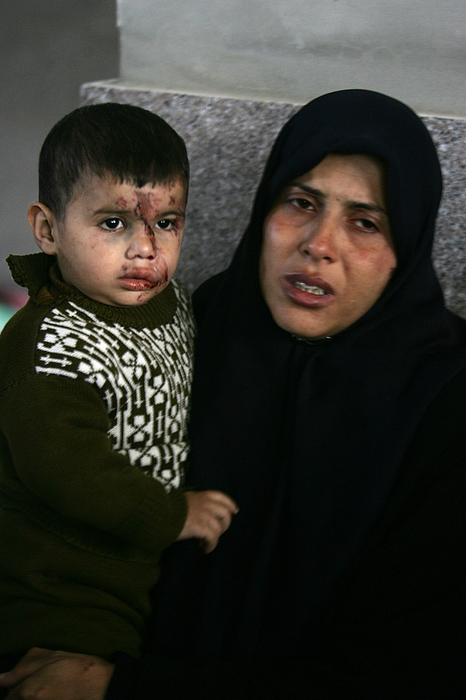 JABALIA, GAZA STRIP - DECEMBER 29: Samera Baalusha (34) carries her surving child Mohamad (15 months) while she waits to see the body of her daughter Jawaher Baalusha (aged 4) during the funeral held for her and four of her sisters who were killed in an Israeli missile strike, on December 29, 2008 in the Jebaliya refugee camp, in the northern Gaza Strip. Jawher Baalusha and four of her sisters were killed during an Israeli air raid while they were sleeping together in their bedroom. Medics stated that the raid had targeted a mosque near their home in Jabalia. Israel continued its air campaign against the Gaza Strip for the third day today, as missiles struck targets and wreaked unprecedented destruction in Gaza, reducing buildings to rubble. The death toll of over 300 victims and about 1,400 wounded continues to rise. (Photo by Abid Katib/Getty Images)

There are no comments for Palestinian Deaths And Injuries Continue To Rise On Third Day Of Israel's Attacks On Gaza.   Click here to post the first comment.