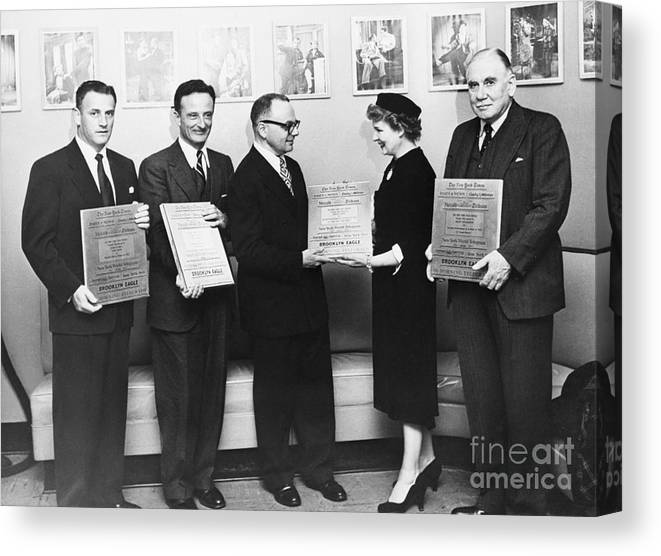 New York Film Critics Awards canvas print by Bettmann.   Bring your artwork to life with the texture and depth of a stretched canvas print. Your image gets printed onto one of our premium canvases and then stretched on a wooden frame of 1.5" x 1.5" stretcher bars (gallery wrap) or 5/8" x 5/8" stretcher bars (museum wrap). Your canvas print will be delivered to you "ready to hang" with pre-attached hanging wire, mounting hooks, and nails.

(Original Caption) 1/18/1953-New York, NY: Shirley Booth accepts her award as "Best Actress of the Year" for her role in "Come Back Little Sheba" from Leo Mishkin, Chairman of the New York Film Critics, at the Presintations of sitations by the group. Producer Stanley Kramer (Left) received the award "High Noon" as the "Best Picture of the Year", and Fred Zimmermann (Second from left) received the award as "Best Director of the Year" for Directing "High Noon". British Consul General Sir Henrey Hobson (Right) accepted for Sir Ralph Richardson the "Best Actor of the Year" award for richardson's performance in "Breaking Through The Sound Barrier".Image provided by Getty Images.