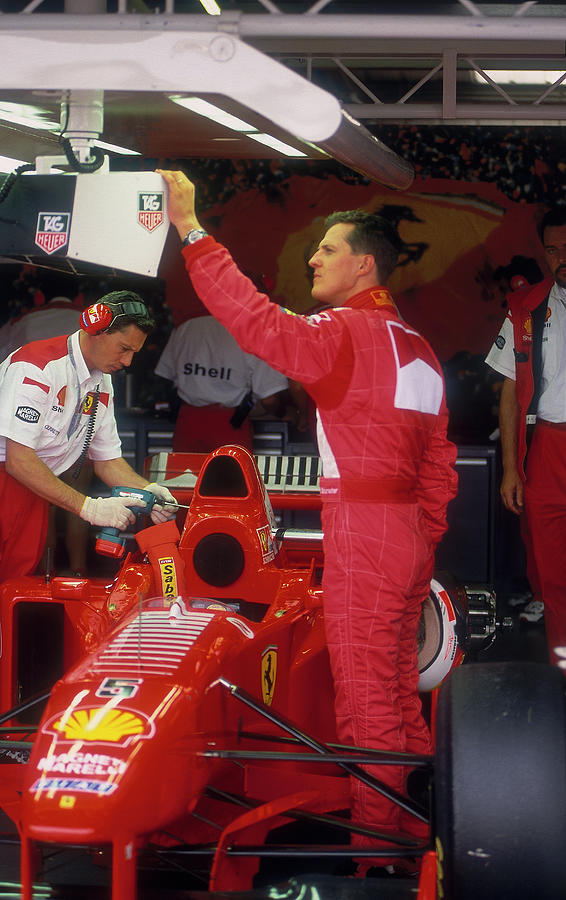 Michael Schumacher with Ferrari, British Grand Prix, Silverstone, Northamptonshire, 1997. When winning his 52nd Grand Prix in 2001, Michael Schumacher became the most successful Formula 1 driver ever in terms of race wins. After a meteoric career in karting and junior formulae, Schumacher entered Formula 1 in 1991 with Jordan, but quickly switched acrimoniously to the more powerful Benetton team, with whom he won his first two World Championships in 1994 and 1995. He then made a lucrative move to Ferrari, and such was his talent that he was able to remain competitive despite the relatively inferior performance and reliability of the car. However, when Ferrari were able to provide him with an improved car, Schumacher repaid them with the 2000 Drivers' title, the first for the team since 1979, repeating the performance in each of the following four seasons. Schumacher's driving brilliance, particularly in the wet, is matched by his ruthlessness, with his single-minded, intimidatory approach to racing having seen him involved in frequent controversy. (Photo by National Motor Museum/Heritage Images/Getty Images)