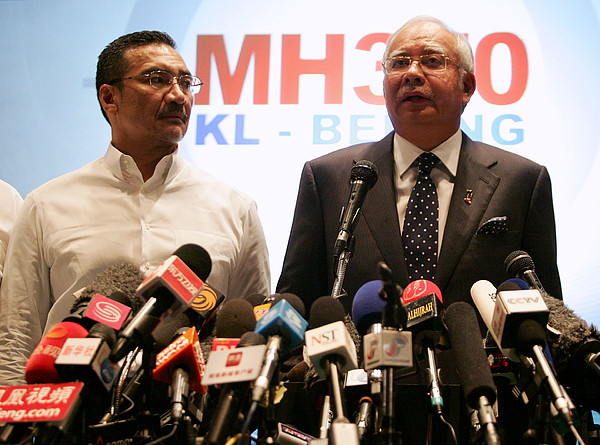 by How Foo Yeen

KUALA LUMPUR, MALAYSIA - MARCH 15: Datuk Hishammuddin Hussein (L), acting Minister of Transport and Malaysian Prime Minister Najib Abdul Razak update the media on the search and rescue plan for the missing MAS Airlines flight MH370 during a press conference on March 15, 2014 in Kuala Lumpur, Malaysia. During the press conference the Prime Minister said that investigators had discovered evidence from satellite and radar systems indicating that the communication systems of the aircraft had been intentionally disabled. The search for the plane in the South China Sea has now been abandoned with the focus switching to two flight corridors, the first stretching from the border of Kazakhstan and Turkmenistan to northern Thailand and a second stretching from Indonesia to the South Indian Ocean.The missing aircraft was carrying 227 passengers and 12 crew. (Photo by How Foo Yeen/Getty Images)