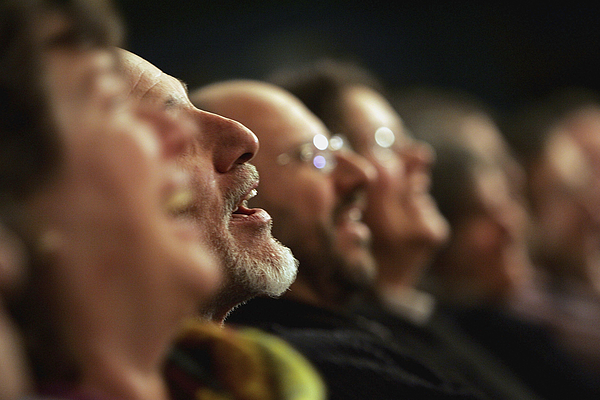 JERUSALEM, ISRAEL - JANUARY 31: The audience reacts to the humour of Palestinian-American standup comedian Ray Hanania, from Chicago, as he performs during the final show of the Israeli-Palestinian Comedy Tour January 31, 2007 in a Jewish synagogue in Jerusalem, Israel. Hanania, along with comedians Charley Warady, an American Jew who immigrated to Israel from Chicago ten years ago, Aaron Freeman, an African-American convert to Judaism living in the Chicago area, and Yisrael Campbell, a Catholic convert to Judaism who moved to Israel from Los Angeles six years ago, put their religious and political differences behind them and joined forces to form the Israeli-Palestinian Comedy Tour. Their stated goal is to inject some much needed laughter into the region?s embattled landscape and to promote coexistence between the two sides through the creative arts. (Photo by David Silverman/Getty Images)