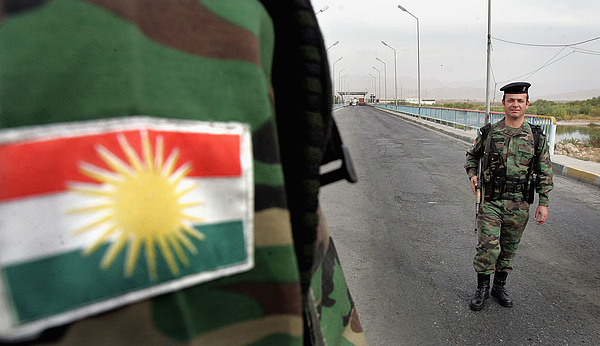 IBRAHIM AL-KHALIL, IRAQ - NOVEMBER 7: Iraqi Kurdish Peshmerga stand guard on the Iraqi-Turkish border, on November 7, 2007 at the Ibrahim al-Khalil crossing, about 300 miles northwest of Baghdad, Iraq. According to reports, Turkey's president, Abduliah Gul, has reached a decision on how to deal with Kurdish rebels in the north of Iraq stating "Turkey has already decided what to do and made preparations before our Prime Minister left to the U.S. But the fact is, the legal occupier of Iraq is the United States. So we have to make a deal with them to fight against terrorism because the U.S. has the responsibility there, to fight against terrorism". (Photo by Wathiq Khuzaie/Getty Images)