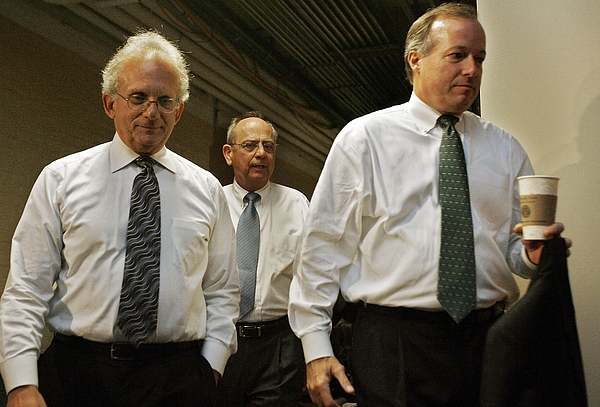 WASHINGTON - OCTOBER 12: (L-R) U.S. House Committee on Standards of Official Conduct ranking Democrat Howard Berman (D-CA), Chairman Doc Hastings (R-WA) and and the chairman's advisor Ed Cassidy walk back into the committee office at the U.S. Capitol October 12, 2006 in Washington, DC. The committee is scheduled to hear from Kirk Fordham, former chief of staff for Rep. Tom Reynolds (R-MO) and disgraced former Rep. Mark Foley (R-FL), after questions were raised about his role in the handling of the congressional page scandal. Fordham had worked for Foley as his chief of staff and campaign manager from 1995 to 2004. Fordham is expected to testify under oath that he alerted the Speaker Dennis Hastert?s (R-IL) office as early as 2003 about inappropriate behavior by Foley. (Photo by Chip Somodevilla/Getty Images)