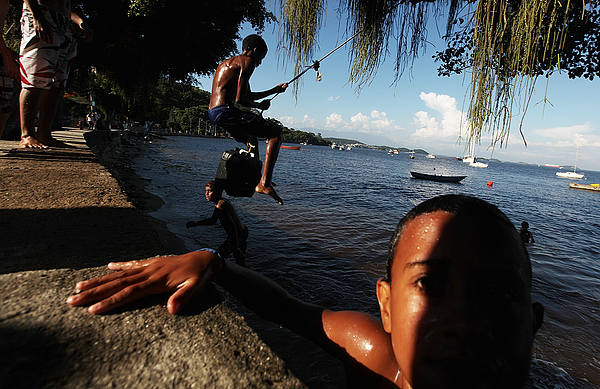 RIO DE JANEIRO, BRAZIL - JANUARY 21: Kids play along the shoreline of the polluted waters of Guanabara Bay in the Ilha do Governador neighborhood on January 21, 2014 in Rio de Janeiro, Brazil. The iconic bay will be the site of sailing events during the Rio 2016 Olympic Games. Although Rio's Olympic bid included the promise to clean up the filthy bay, industrial and human pollution still remain a major problem. According to the Deputy State Secretary of Environment just 34% of Rio's sewage is treated while the remainder flows untreated into the waters. (Photo by Mario Tama/Getty Images)

There are no comments for Heavily Polluted Guanabara Bay To Be Site For Water Sports At Rio Summer Olympics.   Click here to post the first comment.