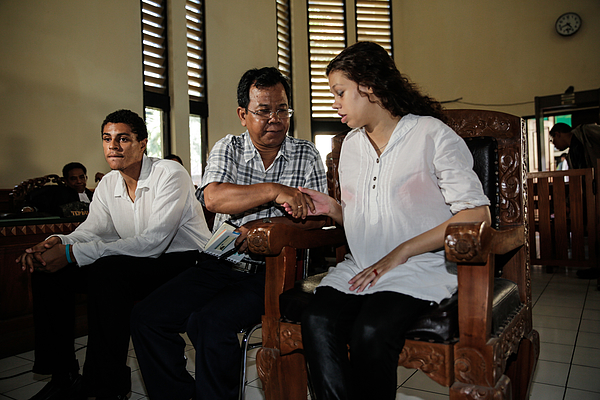 DENPASAR, BALI, INDONESIA - MARCH 31: Heather Mack,19 (R) and Tommy Schaefer, 21 (L), both of the US sit in a courtroom with their translator during their sentence demand trial on March 31, 2015 in Denpasar, Bali, Indonesia. Indonesian prosecutors asked a court to sentence Heather Mack to 15 years and Tommy Schaefer to 18 years in jail. Tommy Schaefer and his girlfriend Heather Mack are accused of murdering Mack's mother, Sheila von Wiese-Mack, whose body was found stuffed inside a suitcase in the back of a taxi outside a luxury Bali hotel in August 2014. (Photo by Agung Parameswara/Getty Images)