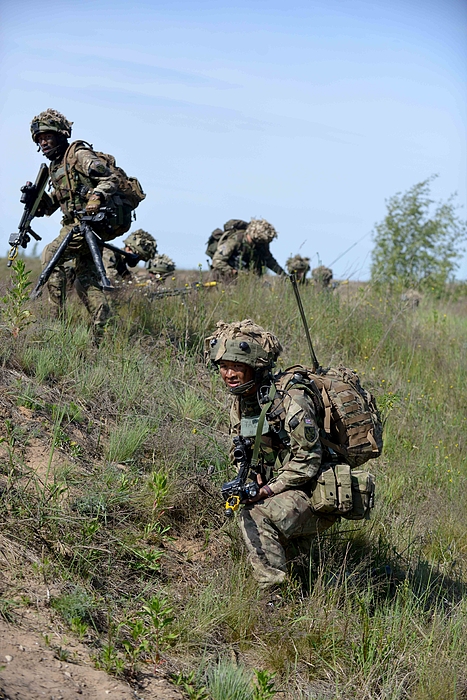 LATVIA - JUNE 10: In this handout image supplied by the Ministry of Defence (MoD), Soldiers take part in a military exercise in an undisclosed location on June 10, 2015 in Latvia. UK-based Gurkhas will join soldiers from over ten NATO countries to conduct military training in Latvia over the coming month. Exercise Saber Strike, a NATO exercise in its fifth year, will see soldiers from across the alliance conducting exercises in Eastern Europe. The UK is providing 230 troops to both support and take part alongside troops from the US, Baltic and Scandinavian states. Lt. Col. Marcus Reedman, commanding the UK contribution, explained the importance of the exercise: "As part of the UK's high readiness Brigade, this training is vital to understanding how our allies work and what we can offer each other on operations....The ability to train and operate effectively within a coalition based upon NATO allies remains the foundation of our capability. Exercises such as this enhance that interoperability and strengthen personal relationships". Soldiers from the Second Battalion Royal Gurkha Rifles (2RGR) form the main body of the UK contribution. While the Gurkhas are light role infantry, used to dismounted fighting, the exercise will see them working alongside tanks, vehicles and aircraft from across NATO. For the Gurkha soldiers, it is the multinational aspect they are most looking forward to. Lieutenant Subas Gurung said: "Every military has its own way of doing things. It is always hectic in the first few days as we get to know each other, but it is rewarding to see the hard work pay off". The Gurkhas continue to celebrate their 200th anniversary of service to the British Crown this year. While some will be in Latvia, more will continue with a pageant of celebration at the Royal Hospital Chelsea. (Photo By Corporal Andy Reddy RLC/MoD via Getty Images)