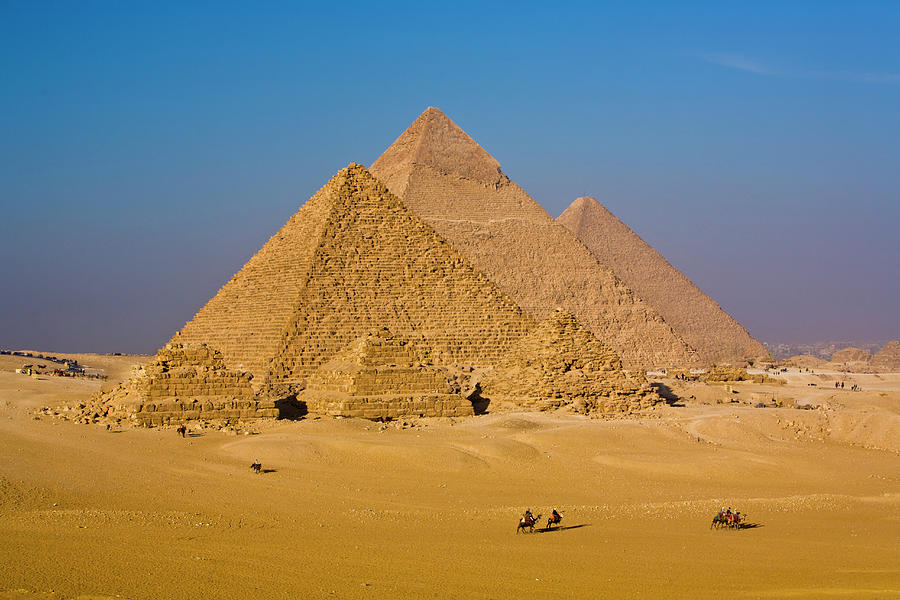 The Great Pyramids of Giza, Egypt. This is the most well-known archeological landmark in the world.This Ancient Egyptian necropolis consists of the Pyramid of Khufu (known as the Great Pyramid and the Pyramid of Cheops), the somewhat smaller Pyramid of Khafre (or Chephren) a few hundred metres to the south-west, and the relatively modest-size Pyramid of Menkaure (or Mykerinus) a few hundred meters further south-west, along with a number of smaller satellite edifices, known as 'queens' pyramids, causeways and valley pyramids. The Great Sphinx lies on the east side of the complex, facing east. Current consensus among Egyptologists is that the head of the Great Sphinx is that of Khafre. Associated with these royal monuments are the tombs of high officials and much later burials and monuments (from the New Kingdom onwards), signifying the reverence to those buried in the necropolis.Of the three, only Menkaure's Pyramid is seen today without any of its original polished limestone casing, with Khafre's Pyramid retaining a prominent display of casing stones at its apex, while Khufu's Pyramid maintains a more limited collection at its base. It is interesting to note that Khafre's Pyramid appears larger than the adjacent Khufu Pyramid by virtue of its more elevated location, and the steeper angle of inclination of its construction Ð it is, in fact, smaller in both height and volume. The most active phase of construction here was in the 25th century BC. The ancient remains of the Giza necropolis have attracted visitors and tourists since classical antiquity, when these Old Kingdom monuments were already over 2,000 years old. It was popularised in Hellenistic times when the Great Pyramid was listed by Antipater of Sidon as one of the Seven Wonders of the World. Today it is the only one of the ancient Wonders still in existence.