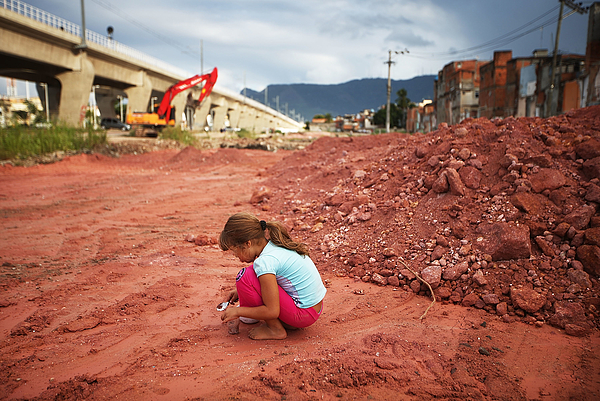 RIO DE JANEIRO, BRAZIL - MAY 10: Resident Gabriela Bieli, 6, plays in the rubble of construction in the Manguinhos 'favela' on May 10, 2014 in Rio de Janiero, Brazil. Residents from one section of the favela, visited by Pope Francis in July 2013, have been affected by construction from an improvement works project begun in 2008. A full sanitation system has yet to be built. Some have been evicted from the area as Rio prepares for the 2014 FIFA World Cup and Rio 2016 Olympic Games. Children living in the affected area have been injured from playing in the rubble while complaining of breathing problems from dust and stomach aches. One child contracted Dengue fever twice and family members believe it was caused by stagnant water in the construction area. (Photo by Mario Tama/Getty Images)