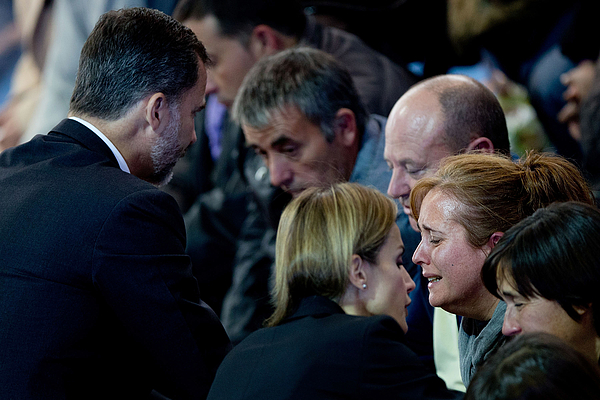 Funeral for the 14 Dead In Bus Accident In Murcia Region

Funeral for the 14 Dead In Bus Accident In Murcia Region

BULLAS, SPAIN - NOVEMBER 10: King Felipe (L) and Queen Letizia (R) of Spain give their condolence to relatives of the 14 victims death at a bus accident this weekend at Juan Valera pavilion on November 10, 2014 in Bullas, at Murcia province, Spain. More than 2 thousand people attend the funerals for the 14 victims who were killed after their bus fell 15 meters from the Calasparra road. The travellers were returning from Madrid to the Murcian town of Bullas after attending a religious ceremony at the Convent of the Barefoot Carmelites. (Photo by Gonzalo Arroyo Moreno/Getty Images)