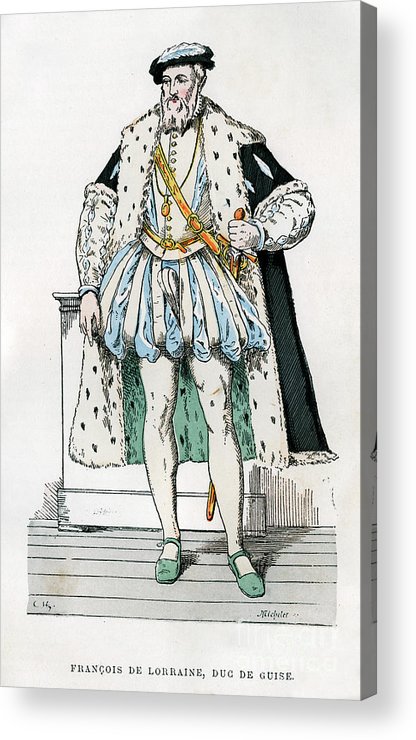 Francis Of Lorraine, 2nd Duke Of Guise acrylic print by Print Collector.   Bring your artwork to life with the stylish lines and added depth of an acrylic print. Your image gets printed directly onto the back of a 1/4" thick sheet of clear acrylic. The high gloss of the acrylic sheet complements the rich colors of any image to produce stunning results. Two different mounting options are available, see below.

Francis of Lorraine, 2nd Duke of Guise, French soldier and politician, 16th century (1882-1884). Francis, Duke of Guise (1519-1563) was created Grand Chamberlain of France in 1551. The following year he earned renown for successfully defending the city of Metz against the invading army of the Emperor Charles V and in 1558 captured Calais, the last remaining English possession in France. After Francis II became King of France in 1559, Guise and his brother Charles, Cardinal of Lorraine, became the most powerful figures on the royal council. The period from 1560 onwards saw increasing tensions between Catholics and Protestants in France, and a botched attempt to kidnap the staunchly Catholic Guises sparked a series of assassinations and counter-assassinations. After the accession of the young Charles IX to the throne, the regent Catherine de' Medici seemed inclined to favour the Protestant cause, leading Francis to take a prominent role at the head of the Catholic faction. A massacre of...