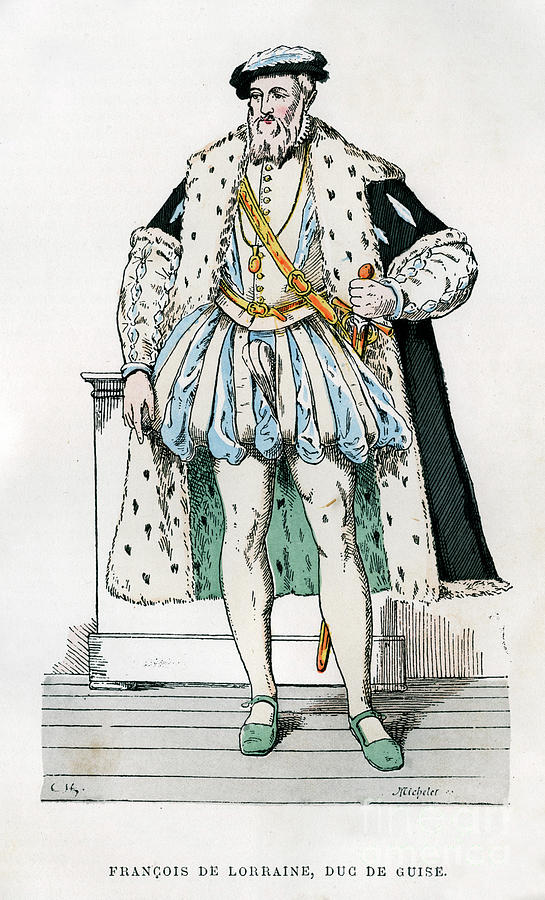 Francis of Lorraine, 2nd Duke of Guise, French soldier and politician, 16th century (1882-1884). Francis, Duke of Guise (1519-1563) was created Grand Chamberlain of France in 1551. The following year he earned renown for successfully defending the city of Metz against the invading army of the Emperor Charles V and in 1558 captured Calais, the last remaining English possession in France. After Francis II became King of France in 1559, Guise and his brother Charles, Cardinal of Lorraine, became the most powerful figures on the royal council. The period from 1560 onwards saw increasing tensions between Catholics and Protestants in France, and a botched attempt to kidnap the staunchly Catholic Guises sparked a series of assassinations and counter-assassinations. After the accession of the young Charles IX to the throne, the regent Catherine de' Medici seemed inclined to favour the Protestant cause, leading Francis to take a prominent role at the head of the Catholic faction. A massacre of Protestants took place at Wassy-sur-Blaise on 1st March 1562 when Francis was present, provoking what would become known as the French Wars of Religion. He was assassinated by a Huguenot whilst besieging the city of Orleans in February 1563. A print from La France et les Français à Travers les Siècles, Volume III, F Roy editor, A Challamel, Saint-Antoine, 1882-1884. (Photo by The Print Collector/Print Collector/Getty Images)