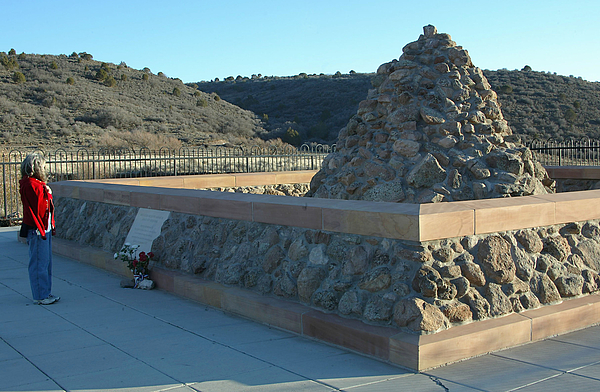 UTAH - DECEMBER 8, 2002: (FILE PHOTO) Cheryl Loits, from Mountain Home, Arkansas, pays her respects to the victims of the Mountain Meadows Massacre at a monument and grave site December 8, 2002 in southern Utah. On September 11, 1857 a wagon train from Arkansas with over 140 men, women and children were led unarmed from their camp and all but 17 children under the age of seven were killed by a local Mormon militia and Indians in the area. The group consisted of some 40 men, 30 women and 70 children. The story of the Mountain Meadows Massacre and the fundamentalist Mormons are chronicled in a new book by Jon Krakauer "Under the Banner of Heaven: A Story of Violent Faith." (Photo by George Frey/Getty Images)