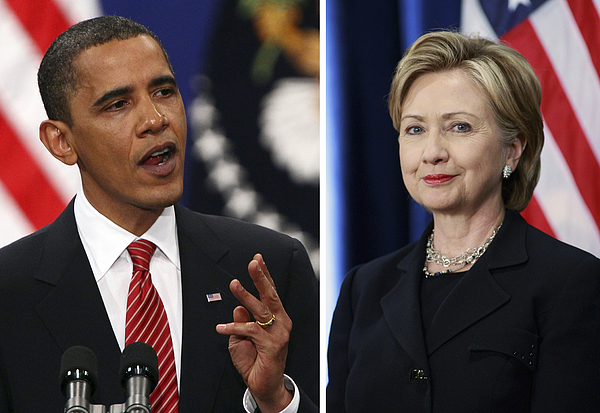 (FILE PHOTO) In this composite image a comparison has been made between US President Barack Obama and his serving Secretary of State Hillary Clinton. ***LEFT IMAGE*** WEST POINT, NY - DECEMBER 01: U.S. President Barack Obama speaks at the U.S. Military Academy at West Point on December 1, 2009 in West Point, New York. President Obama laid out his plan for an initial increase of some 30,000 troops in an effort to eventually begin to transition U.S. forces out of Afghanistan starting in July 2011. (Photo by Win McNamee/Getty Images) ***RIGHT IMAGE*** CHICAGO - DECEMBER 01: Senator Hillary Clinton (D-NY) listens as President-elect Barack Obama introduces her as his choice for secretary of state during a press conference at the Hilton Hotel December 01, 2008 in Chicago, Illinois. (Photo by Scott Olson/Getty Images)