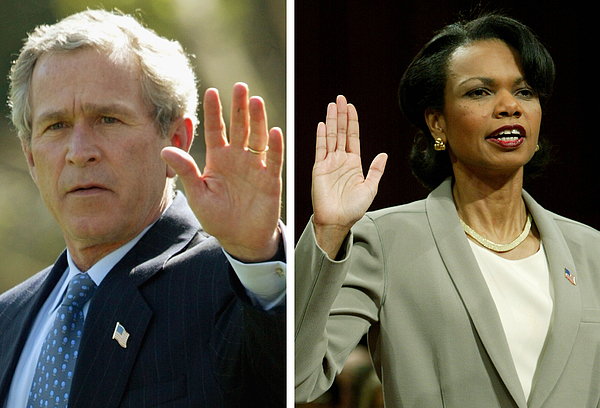 (FILE PHOTO) In this composite image a comparison has been made between former US President George W. Bush and his serving Secretary of State Condoleezza Rice. ***LEFT IMAGE*** WASHINGTON - APRIL 16: U.S. President George W. Bush waves as he walks towards Marine One April 16, 2004 at the South Lawn of the White House in Washington, DC. Bush will spend his weekend at Camp David. (Photo by Alex Wong/Getty Images) ***RIGHT IMAGE*** WASHINGTON - APRIL 8: U.S. National Security Adviser Condoleezza Rice is sworn in before testifying at the National Commission on Terrorist Attacks on the United States, on Capitol Hill April 8, 2004 in Washington, DC. Rice is defending the Bush administration's anti-terror policy to the panel investigating what happened before the September 11, 2001 terrorist attacks. (Photo by Alex Wong/Getty Images)