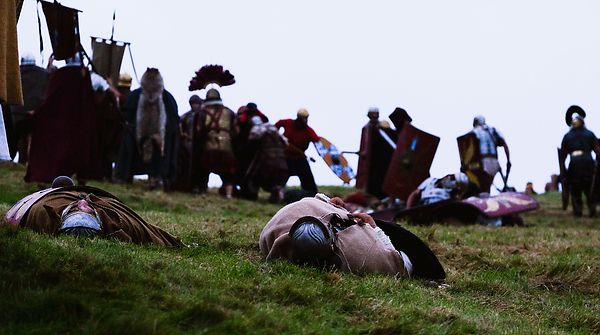 CARLISLE, ENGLAND - SEPTEMBER 03: The bodies of 'dead Barbarians' lie on the battlefield during a skirmish as the lives of Roman Legionnaires are re-enacted during the Hadrian's Wall Live event at Housesteads Roman fort on September 3, 2016 in Carlisle, England. The event which was organised by English Heritage brought together over 120 re-enactors from around Europe to create a living history camp for visitors to Birdoswald and Housesteads Roman forts on Hadrian's Wall in Northumberland. During the weekend the sights, sounds and smells of Roman and Barbarian life from around 124 AD were recreated with battle tactics, patrolling, camp life, cooking skills and equipment demonstrated. Hadrian's Wall stretches 73 miles from sea to sea across the north of England and is a World heritage site. (Photo by Ian Forsyth/Getty Images)