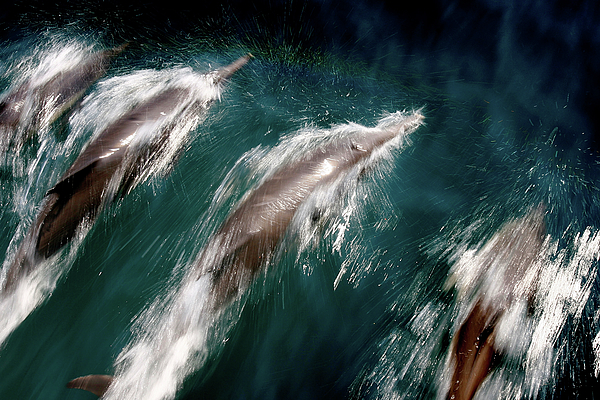 LONG BEACH, CA - JULY 16: A pod of common dolphins surf the bow wake of a boat during an excursion to search for rare and endangered blue whales feeding off Long Beach Harbor in the Catalina Channel, spouts near offshore oil rigs after a long dive July 16, 2008 near Long Beach, California. In decades past, blue whales were rarely seen along California's coastline but their migration and feeding patterns are changing. In the past four years sightings in southern California have increased dramatically and blue whales have been reported almost daily this summer. Scientists suspect that climate change is having an effect on the food of the blues but other factors have not been ruled out. Before whalers stepped up their kill rate in the 1800s, there were at least 220,000 to 300,000 around the world. Today less than 11,000 survive worldwide with 1,200 to 2,000 in the Pacific waters off California. Blue whales are the largest animals on the planet, growing up to 110 feet long and reaching a weight of 200 tons. The U.S. Navy uses loud sonar blasts in submarine detection training exercises off Southern California that can harm or kill whales at great distances, a controversial issue that has reached the U.S. Supreme Court, and the high price of gas has increased political pressure to increase oil drilling in the waters where the whales live. (Photo by David McNew/Getty Images)