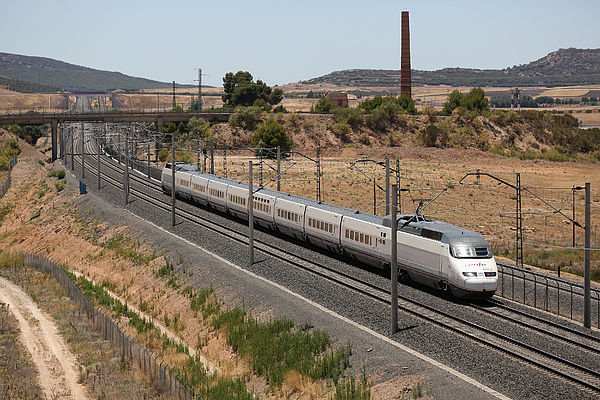 CIUDAD REAL, SPAIN - JULY 06: A high-speed train passes in front of Cuidad Real International Airport which stands dormant after closing in April 2012, when all scheduled flights ceased to operate to or from it, on July 6, 2012 in Ciudad Real, Spain. The large international airport, which was completed in 2009 at a cost of 1.1 billion euros, was intended to serve both Madrid and the Andalucían coast, accessible in 50 minutes via a high speed rail link, however lack of demand driven by Spain’s economic crisis has seen closure after just three years. Despite having the fourth largest economy in the Eurozone, the economic situation in Spain remains troubled with their unemployment rate the highest of any Eurozone country. Spain is currently administering billions of euros of spending cuts and tax increases in a bid to manage its national debt. Spain also has access to loans of up to 100 billion euros from the European Financial Stability Facility which will be used to rescue the country's banks that have been badly affected by a crash in property prices. (Photo by Oli Scarff/Getty Images)