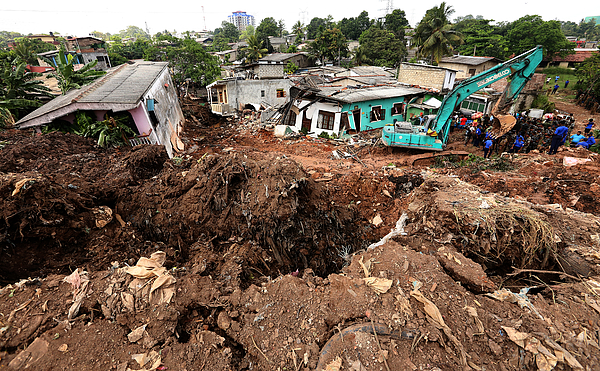 Heavy machinery are used by Sri Lanka Army personnel during rescue operations at the collapsed garbage mountain in Meethotamulla, Colombo, Sri Lanka 15 April 2017.
Following a fire that broke out on Friday 14 2017 at the garbage dump that had grown into a huge man-made mountain measuring 300 feet (91.5 metres) in height, resulting in a large section collapsing on to the houses of low and middle income earners' dwellings in the vicinity. According to local officials, 40 houses have been buried with 10 deaths reported and another seven undergoing treatment at the National Hospital in Colombo. Authorities are working on cause of the fire, while search efforts for those possibly still trapped or buried under the debris continue (Photo by Tharaka Basnayaka/NurPhoto via Getty Images)