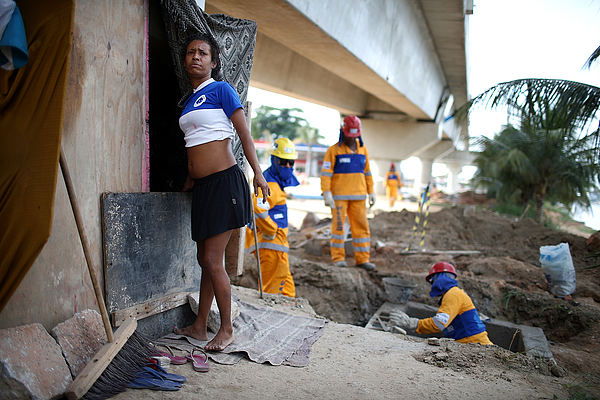 RIO DE JANEIRO, BRAZIL - MAY 22: Viviane Sabino de Souza pauses outside her makeshift dwelling next to construction workers on a stretch of the Transcarioca BRT (Bus Rapid Transit) highway being constructed on May 22, 2014 in Rio de Janeiro, Brazil. De Souza says her parents were killed in flooding north of Rio de Janeiro, leaving her homeless last year. She has lived beneath the stretch of new highway for about six weeks and awaits government assistance in procuring new identification papers. De Souza earns money partially by collecting recyclable materials discarded from construction of the highway. The Transcarioca is part of the larger BRT system being constructed which will link Rio's international airport with Barra da Tijuca, the main site of the Rio 2016 Olympic Games. The city is taking on a number of infrastructure projects ahead of the 2014 FIFA World Cup and Rio 2016 Olympic Games. (Photo by Mario Tama/Getty Images)