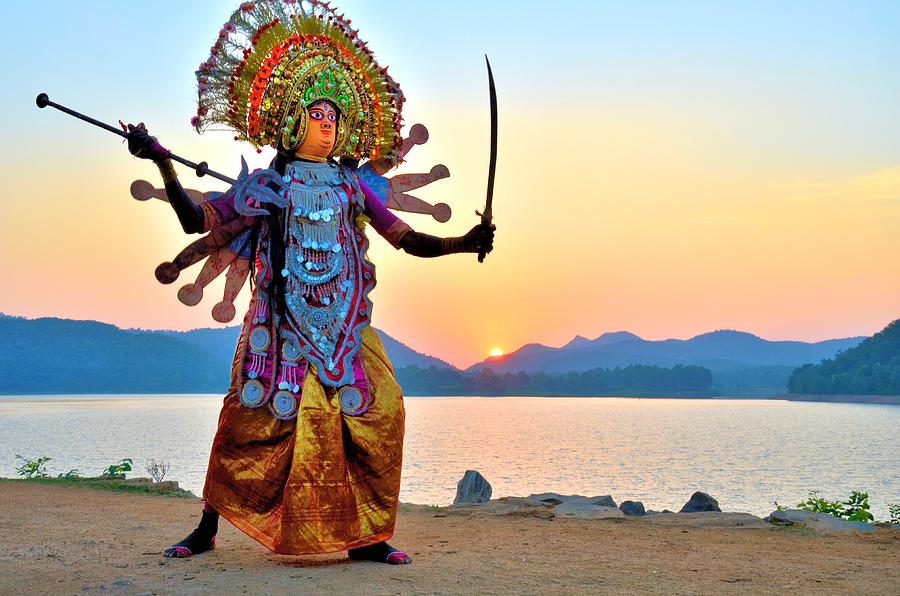 Durga, the supremely radiant ten-armed mother goddess, killing the Buffalo-Demon (Mahishasura) Masked chhau dancers performing while the sun sets at Murguma dam, Purulia Distrct, West Bengal, IndiaChhau DanceChhau, the masked dance of the ancient warrior, is hugely popular across the tribal areas of West Bengal and Bihar. Magnificent outsized masks, breathtaking acrobatics, wild combat and comedy scenes accompanied by powerful drumming make the performance an unforgettable experience!Chhau is perhaps the oldest masked dance in the world having originated in the soldiers barracks of the past when Rarh (part of Bengal and Bihar state of India) was a mighty military nation.Though there are three prominent Chhau styles today, the Mayurbhanj, Seraikella and Purulia dance styles, the Purulia Chhau dance is said to be the original and is the most vigorous.Murguma is a beautiful place in Purulia. It is a huge waterbody, a man made dam, surrounded by hills. Muruguma Lake and the forest will make your trip worthwhile. This place can be reached by car from both Purulia and Muri (Jharkhand) stations.