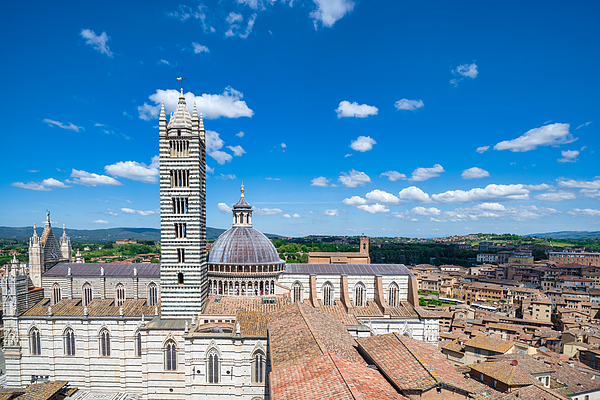 Siena, Tuscany, Italy- May, 31, 2019:The Cathedral of Siena dedicated to Santa Maria Assunta is a superb masterpiece in Italian Gothic style. It was built between 1215 and 1263 on the site of a previous building. The plan of the cathedral of Siena is a Latin cross with transept, dome and bell tower. The lantern on the dome was added by Gian Lorenzo Bernini in the seventeenth century. Both the exterior and interior are in white marble and green/black marble with alternating stripes, with the addition of red marble in the facade. White and black are the symbolic colours of the city, and refer to the white and black horses of the legendary founders of Siena: Senio and Aschio, sons of Remo.