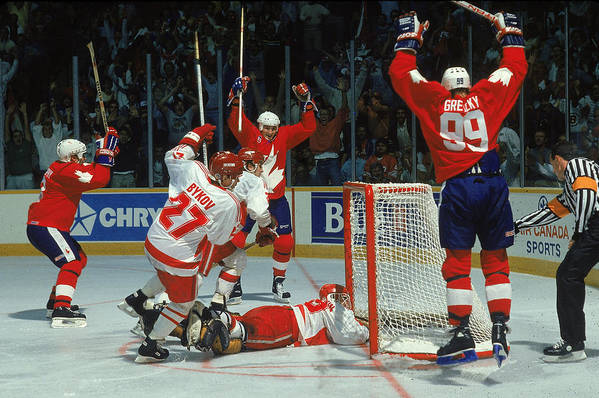 Canada Cup Victory art print by B Bennett.   Our art prints are produced on acid-free papers using archival inks to guarantee that they last a lifetime without fading or loss of color. All art prints include a 1" white border around the image to allow for future framing and matting, if desired.

HAMILTON, ON - SEPTEMBER 13: Mario Lemieux #66 teammate Wayne Gretzky #99 and Larry Murphy (left) raise their sticks in the air and celebrate the game winning goal scored against Team Soviet Union during Game 2 of the 1987 Canada Cup on September 13, 1987 at the Copps Coliseum in Hamilton, Ontario, Canada. Russian professional hockey player Vyacheslav Bykov of Team USSR stands over the fallen Soviet goalie, who lies in front of the goal post. (Photo by Bruce Bennett Studios/Getty Images)Image provided by Getty Images.