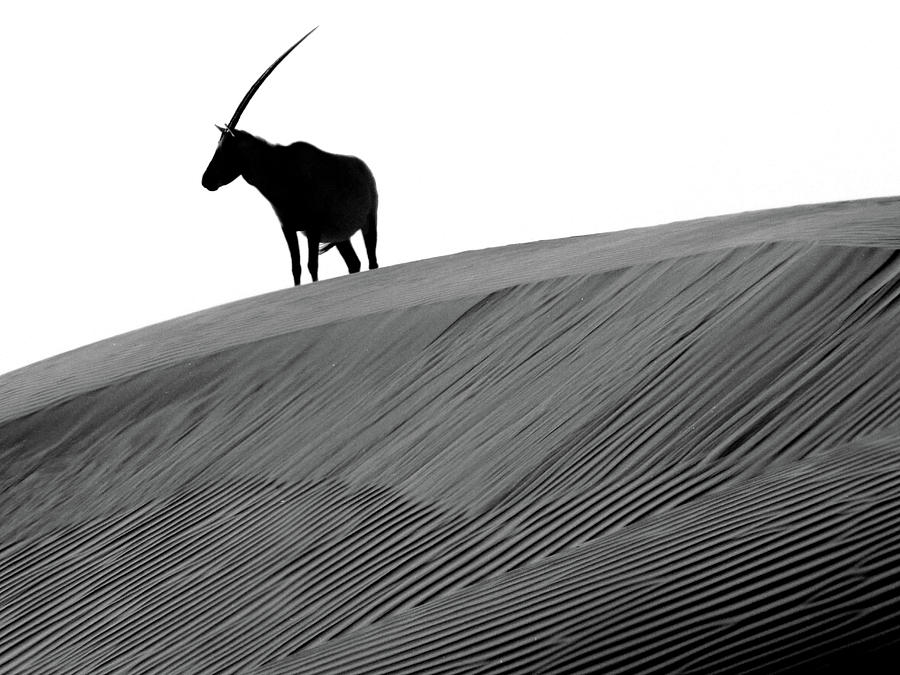 Arabian Oryx And The Myth Of The Unicorn

Arabian Oryx And The Myth Of The Unicorn

A black and white photograph of an Arabian Oryx seen in perfect side on profile atop a sand dune crest, only one horn on the animal is visible and this gives it the appearance of a unicorn. The Arabian Oryx is silhouetted black against a clear white sky background. In the foreground are a complex series of grey and black stripped shadows formed by the rippling sand on the steep slip face of the desert sand dune.The Arabian oryx (Oryx leucoryx), or white oryx is a medium-sized antelope with a distinct shoulder bump, long, straight horns, and a tufted tail. It is the smallest member of Oryx genus, native to desert and steppe areas of the Arabian Peninsula.The mythical unicorn may have originated in part from the Arabian oryx, which can appear to have only one horn when seen in profile.An alternative origin of the mythical one-horned unicorn may have been from sightings of an injured oryx; Aristotle and Pliny the Elder held that the oryx was the prototype of the unicorn. From certain angles, the oryx may be mistaken as having one horn instead of two, and given that its horns are made from hollow bone which cannot be regrown, if an oryx were to lose one of its horns, for the rest of its life it would have only one horn.