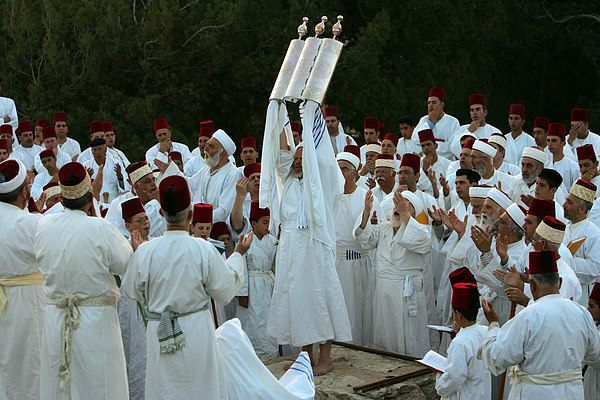 NABLUS, WEST BANK - MAY 7: The High Priest of the ancient Samaritan sect holds aloft a silver-encased Torah scroll as the community holds prayers at dawn on the last day of their Passover celebrations on top of Mount Gerizim May 7, 2007 near the northern West Bank city of Nablus. The Samaritan religion is based on four principles of faith, One God - the God of Israel, One Prophet - Moses Ben Amram, belief in the Torah - the first five books of the Hebrew bible and One Holy Place - Mount Gerizim. Despite its similarity to Judaism, the Samaritan community which numbers less than 720 people, half living at Mount Gerizim in the West Bank and the others in Holon near Tel Aviv in Israel, are not recognized as being Jewish. (Photo by David Silverman/Getty Images)