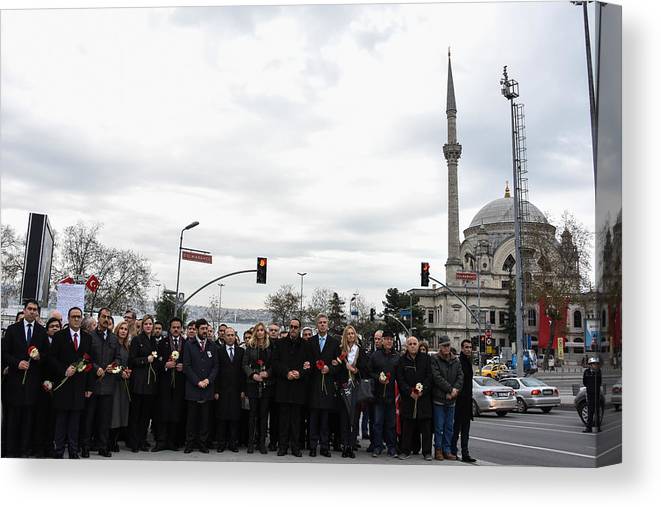 Aftermath Of Suicide Bomb Attacks In Istanbul canvas print by Getty Images.   Bring your artwork to life with the texture and depth of a stretched canvas print. Your image gets printed onto one of our premium canvases and then stretched on a wooden frame of 1.5" x 1.5" stretcher bars (gallery wrap) or 5/8" x 5/8" stretcher bars (museum wrap). Your canvas print will be delivered to you "ready to hang" with pre-attached hanging wire, mounting hooks, and nails.

ISTANBUL, TURKEY - DECEMBER 12: Ambassadors of EU countries and representatives of foreign missions in Turkey visit the blast site outside the Besiktas FC's Vodafone Arena Stadium in Istanbul, December 12, 2016, Turkey. At least 44 people were killed and 160 other wounded in twin explosions outside Vodafone Arena Stadium and in nearby Macka Park a few hours after the night's soccer match on 10 December. The bombs apparently targeted police officers who were securing the match. The Kurdish nationalist group Kurdistan Freedom Hawks (TAK), which seeks an independent Kurdish state in eastern and southeastern Turkey, claimed responsibility for the attack, according to published reports. (Photo by Stringer/Getty Images)Image provided by Getty Images.