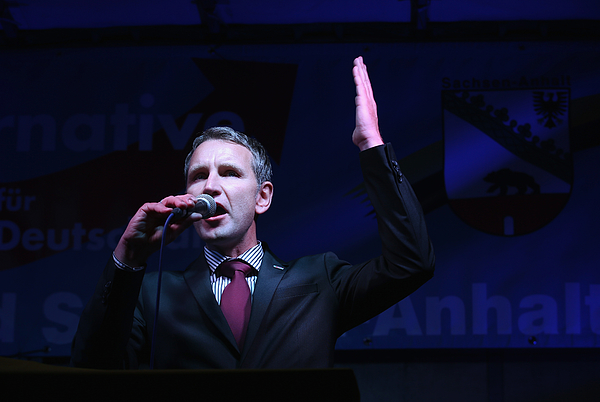 MAGDEBURG, GERMANY - OCTOBER 14: Bjoern Hoecke, head of the AfD in Thuringia, speaks to supporters gathered to protest against the German government's liberal policy towards taking in migrants and refugees on October 14, 2015 in Magdeburg, Germany. Hoecke demanded Germany close its borders and warned of civil war due to the large number of migrants who have arrived this year. The AfD (Alternative fuer Deutschland, or Alternative for Germany) is a relatively new conservative, populist party that has won seats in some German state parliaments. Its more right-wing faction has been especially vocal in demanding that Germany stem the flow of migrants ntering the country. Germany is expected to receive a million migrants or more this year and right-wing politicians see rising social discontent over the newcomers as a political opportunity. (Photo by Sean Gallup/Getty Images)