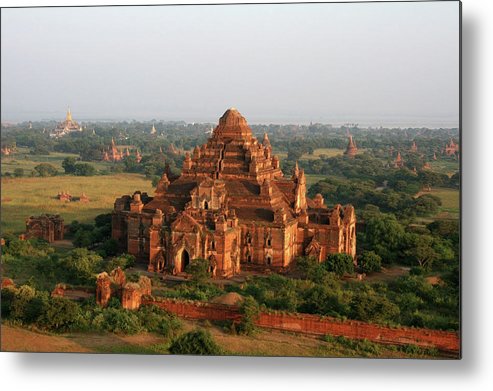 Aerial View Of Dhammayangyi, Bagan metal print by Joe & Clair Carnegie / Libyan Soup.   Bring your artwork to life with the stylish lines and added depth of a metal print. Your image gets printed directly onto a sheet of 1/16" thick aluminum. The aluminum sheet is offset from the wall by a 3/4" thick wooden frame which is attached to the back. The high gloss of the aluminum sheet complements the rich colors of any image to produce stunning results.

Aerial view of Dhammayangyi temple with Ananda in the background taken from a hot air balloon over Bagan.Dhammayangyi Temple is the most massive structure in Bagan and has a similar architectural plan to Ananda Temple. It was built by King Narathu (1167-70 AD), who was also known as Kalagya Min, meaning the 'King killed by Indians'. After murdering his own father, Narathu ascended the throne of Bagan and began this temple. It is said that Narathu oversaw the construction himself and that masons were excecuted if a needle could be pushed between bricks they had laid. But he never finished the construction because he was assassinated inside the temple before its completion. On his death work on the temple ceased.The interior floor plan of the temple includes two ambulatories. Almost all the entire innermost passage, however, was intentionally filled with brick rubble centuries ago. Three out of the four Buddha sanctums were also filled with bricks. The remaining western shrine features t...