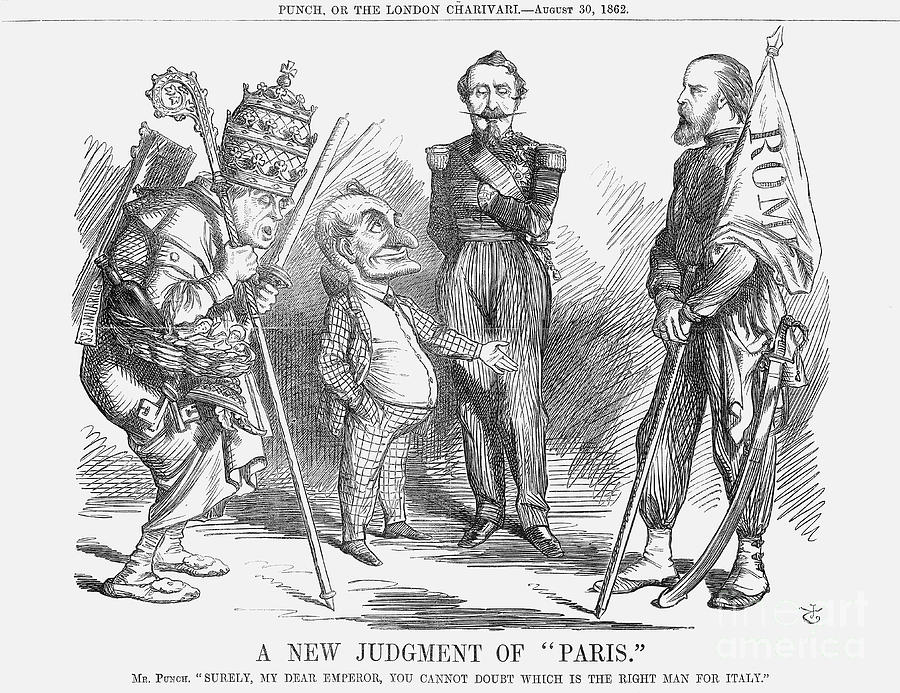 'A New Judgement of Paris', 1862. Mr. Punch says: Surely, My Dear Emperor, You Cannot Doubt Which is The Right Man for Italy. This cartoon refers to Garibaldi's plan to conquer Rome. He had come out of his retirement and had built a volunteer army in Sicily. Rattazzi, the Italian prime minister, decided that Garibaldi must be stopped. In August 1862, Garibaldi's army was defeated at Aspromonte. Garibaldi was injured but his English supporters sent over a top surgeon to extract the bullet from his leg. The Italians had been very disappointed by Napoleon's failure to honour his promise to free Italy. Napoleon had proposed to withdraw his soldiers from Rome, an announcement which considerably worried the Pope. Here, Mr Punch asks whether Napoleon had any real choice between the best man to lead Rome; the ineffectual and encumbered Pope Pius IX, shown here with all the heavy accoutrements of his office, or the lean and competent Garibaldi. From Punch, or the London Charivari, August 30, 1862. (Photo by The Cartoon Collector/Print Collector/Getty Images)