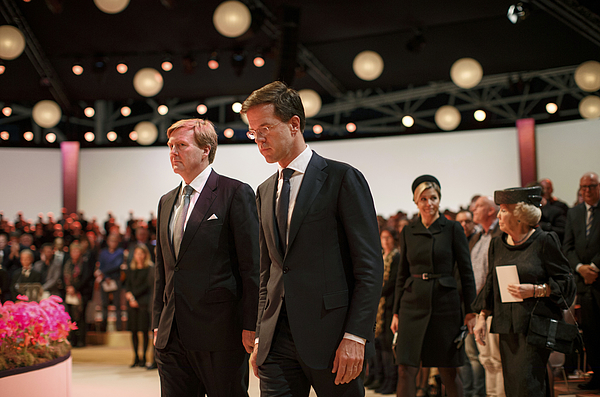 AMSTERDAM, NETHERLANDS - NOVEMBER 10: (L-R) King Willem-Alexander of the Netherlands, Dutch Prime Minister Mark Rutte, Queen Maxima of the Netherlands and Princess Beatrix of the Netherlands arrive to attend a commemoration ceremony with relatives and friends of the victims of the Malaysia Airlines Flight 17 disaster at RAI on November 10, 2014 in Amsterdam, Netherlands. Hundreds of grieving family members and friends are gathering in Amsterdam for a national commemoration ceremony nearly four months after the passenger jet was downed over eastern Ukraine killing all 298 people on board. The Boeing 777 was downed July 17 while flying from Amsterdam to Kuala Lumpur. (Photo by Jasper Juinen-Pool/Getty Images)