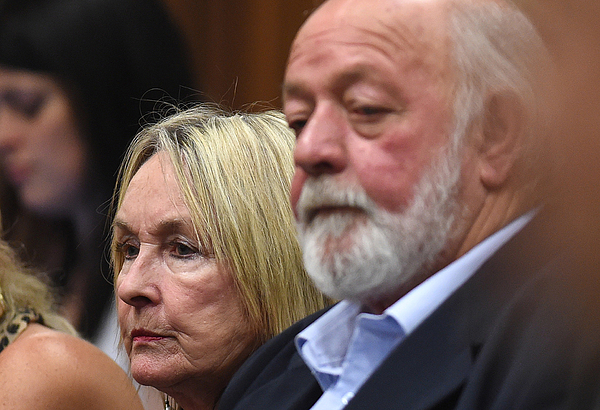 PRETORIA, SOUTH AFRICA - SEPTEMBER 11: (BY COURT ORDER, THIS IMAGE IS FREE TO USE) Reeva Steenkamp's parents, Barry Steenkamp and June Steenkamp sit in the Pretoria High Court on September 11, 2014, in Pretoria, South Africa. South African Judge Thokosile Masipa is due to give her verdict as the six month trial of Olympic double-amputee sprinter Oscar Pistorius comes to an end today. His defence maintained that Mr Pistorius mistook Ms Reeva Steenkamp for an intruder in his home when he fired several shots into his bathroom allegedly in self-defence but killing his girlfriend. (Photo Phill Magakoe - Pool/Independent Newspapers/Gallo Images/Getty Images)