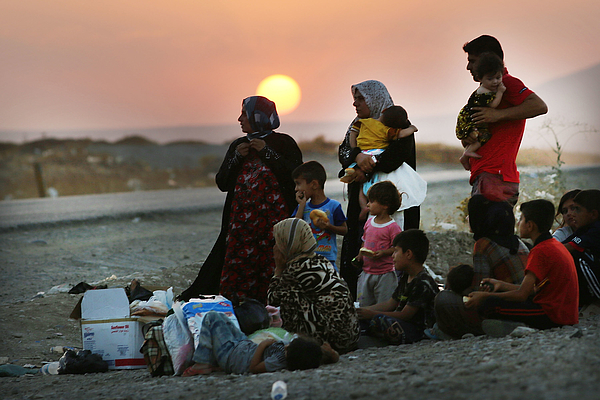 KHAZAIR, IRAQ - JULY 03: A Iraqi family who fled recent fighting near the city of Mosul prepares to sleep on the ground as they try to enter a temporary displacement camp but are blocked by Kurdish soldiers on July 3, 2014 in Khazair, Iraq. The families, many with small and sick children, have no shelter and little water and food. The displacement camp Khazair is now home to an estimated 1,500 internally displaced persons (IDP's) with the number rising daily. Tens of thousands of people have fled Iraq's second largest city of Mosul after it was overrun by ISIS (Islamic State of Iraq and Syria) militants. Many have been temporarily housed at various IDP camps around the region including the area close to Erbil, as they hope to enter the safety of the nearby Kurdish region. (Photo by Spencer Platt/Getty Images)