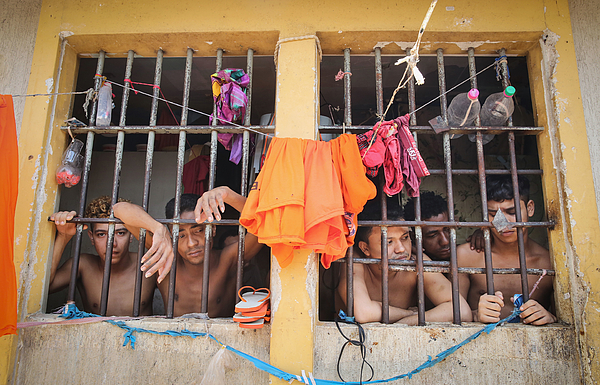 SAO LUIS, BRAZIL - JANUARY 27: Inmates stand in their cell in the Pedrinhas Prison Complex, the largest penitentiary in Maranhao state, on January 27, 2015 in Sao Luis, Brazil. Previously one of the most violent prisons in Brazil, Pedrinhas has seen efforts from a new state administration, new prison officials and judiciary leaders from Maranhao which appear to have quelled some of the unrest within the complex. In 2013, nearly 60 inmates were killed within the complex, including three who were beheaded during rioting. Much of the violence stemmed from broken cells allowing inmates and gang rivals to mix in the patios and open spaces of the complex. Officials recently repaired and repopulated the cells allowing law enforcement access and decreasing violence among prisoners, according to officials. Other reforms include a policy of custody hearings and real-time camera feeds. According to officials there have been no prisoner on prisoner killings inside the complex in nearly four months. Critics believe overcrowding is one of the primary causes of rioting and violence in Brazil's prisons. Additionally, overcrowding has strengthened prison gangs which now span the country and contol certain peripheries of cities including Rio de Janeiro, Sao Paulo and Sao Luis. Brazil now has the fourth-largest prison population in the world behind the U.S., Russia and China. The population of those imprisoned had quadrupled in the past twenty years to around 550,000 and the country needs at least 200,000 new incarceration spaces to eliminate overcrowding. A vast increase in minor drug arrests, a dearth of legal advice for prisoners and a lack of political will for new prisons have contributed to the increases. (Photo by Mario Tama/Getty Images)