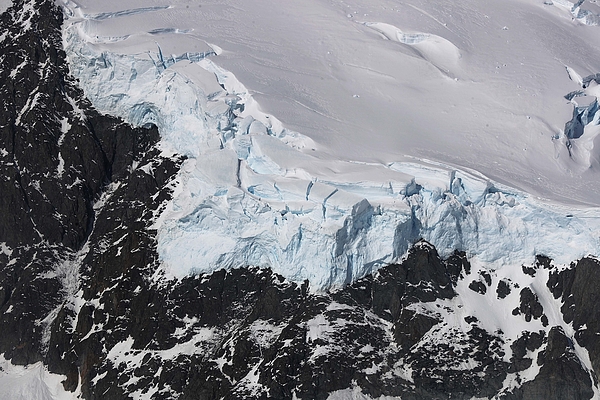 UNSPECIFIED, ANTARCTICA - OCTOBER 31: Lans ice stands atop a ridge as seen from NASA's Operation IceBridge research aircraft, in the Antarctic Peninsula region, on October 31, 2017, above Antarctica. NASA's Operation IceBridge has been studying how polar ice has evolved over the past nine years and is currently flying a set of nine-hour research flights over West Antarctica to monitor ice loss aboard a retrofitted 1966 Lockheed P-3 aircraft. According to NASA, the current mission targets 'sea ice in the Bellingshausen and Weddell seas and glaciers in the Antarctic Peninsula and along the English and Bryan Coasts.' Researchers have used the IceBridge data to observe that the West Antarctic Ice Sheet may be in a state of irreversible decline directly contributing to rising sea levels. The National Climate Assessment, a study produced every 4 years by scientists from 13 federal agencies of the U.S. government, released a stark report November 2 stating that global temperature rise over the past 115 years has been primarily caused by 'human activities, especially emissions of greenhouse gases'. (Photo by Mario Tama/Getty Images)