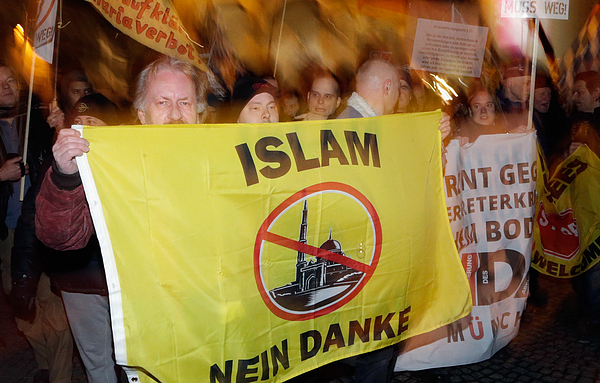 MUNICH, GERMANY - JANUARY 11: Supporters of the right-wing populist group Pegida march on January 11, 2016 in Munich, Germany. Pegida and other right-wing activists have been quick to latch on to the New Year's Eve sex attacks in Cologne. Over 100 women have filed charges of sexual molestation, robbery and in two cases, rape, stemming from aggressive groping and other behavior by gangs of drunken men described as Arab or North African at Hauptbahnhof on New Year's Eve. Police have recently stated that at least some of the men identified so far are refugees, which is feeding the propaganda of right-wing groups opposed to Germany's open-door refugee policy. Germany took in approximately 1.1 million migrants and refugees in 2015. (Photo by Johannes Simon/Getty Images)